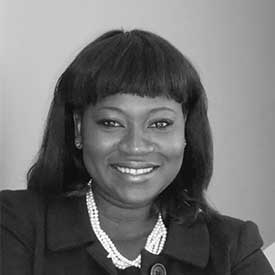 Stephanie Foster launched a stellar career in financial technology nearly two decades ago at Western Union (WU), where she started as an operations intern and worked her way up to the role of Senior Regional Manager. With intense focus and discipline, Stephanie led global cross-functional teams and managed more than $50 million in revenue and over 1,000 agent locations in 13 territories.

In her current role as a product manager at Fiserv, Stephanie devotes her attention to a core product team of more than 20 people that she built to implement a metric-based go-to-market strategy for a new Software as a Service (SaaS) product designed for the top 100 commercial banks and corporations.

A relationship-driven strategist, Stephanie was named one of the Electronic Transaction Association’s (ETA) Forty Under 40 for 2019, an annual award that celebrates gamechangers in the payments technology industry. In 2018, she was selected from a list of 500 international nominees to participate in Money 20/20’s inaugural Rise Up program, an exclusive cohort of 35 women leaders in the financial services ecosystem.

As part of her commitment to strengthening diversity and inclusion in her industry, Stephanie helped found Women in Wireless with the mission to connect, inspire and empower the next generation of female thought leaders in tech. She also serves as a member of the Women’s Network in Electronic Transactions’ (Wnet) Advisory Board.