Recently, Apple made the somewhat stealthy purchase of UK fintech Credit Kudos for an estimated $150 million. Rumors abound as to why they would snap up such a company. Was it to develop their own buy now, pay later (BNPL) initiatives for the EU market? The UK has been, after all, a hotbed of BNPL activity in recent months. Or… was it to provide support for the launch of an Apple Card in the EU? It’s been nearly three years since this card launched in the US, and clearly Apple has a significant fan based in the European region. Or… was it to perhaps provide intelligence for the underwriting of subscriptions for their hardware, as surfaced a couple of weeks ago in the press.

We asked our considerable hive mind on social media what they thought in a recent non-scientific survey, with the majority of respondents indicating that they thought the purchase was for the Apple Card, followed by BNPL, and then iPhone subscriptions. 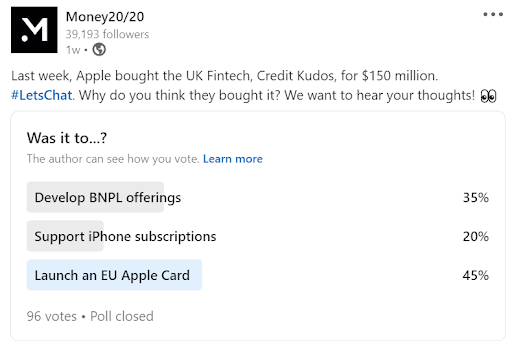 We also had some reader feedback – Salvatore Peretta thought by process of elimination that the BNPL option seemed the most likely, but also flagged that Apple has been known to acquire companies that “disappeared”.

The media (myself included) are often known to make tenuous leaps of faith in terms of an acquisition telegraphing a potential strategic direction for a company or industry, and reading the Apple tea leaves can be particularly challenging given how little intel the company allows to trickle out of Cupertino.

In this case however, I think connecting the dots between action and consequence is relatively straightforward, and relies on Occam’s Razor – “with competing theories or explanations, the simpler one, for example a model with fewer parameters, is to be preferred.” Or, in other words, the simplest explanation is probably the right one. In this case, it may be all of the above – BNPL, card, and subscriptions.

A fundamental requirement of any financial services product today is intelligence to provide the best products and services for a consumer at any point in their financial lives, and to morph as required as their journey unfolds. Not meeting these needs invites diminished usage and ultimately defection to products and services that better meet their needs. In Credit Kudos’ own words; “Our products help lenders streamline underwriting, improve accuracy in decision-making, and support customers after acquisition through our engagement tools.”

Occam’s Razor tells us that Apple’s acquisition of Credit Kudos was to do exactly what it says on the box – better analytics, faster decisioning and ultimately ongoing engagement – all critical features of BNPL, credit, subscriptions, or indeed any financial services offering.

Sometimes the answer is hiding in plain sight.

Don’t be a spectator in 2022. Be part of fintech's future. Grab your pass for Money20/20 USA, the only place where the whole community comes together for fintech’s biggest conversation.